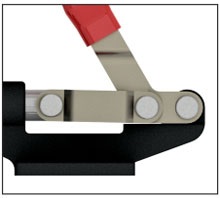 The Toggle claming device Mechanism in a clamp has three functions.