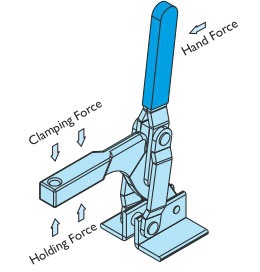 The over-center dimension is carefully chosen in relation to the elasticity of the toggle clamp to maximize clamping force while ensuring that the toggle clamp locks closed even under vibration or intermittent loading.

Clamping Force, the amount of force actually applied to the work piece by closing and locking the toggle clamp, is generally less than the stated holding capacity. Actual clamping force depends on many factors including; spindle position, proper spindle height adjustment, spindle cushioning, work piece material and the toggle clamps mechanical advantage. In most cases, roughly 1/3rd of the stated holding capacity can be applied by hand with medium effort.